What Can Nevada Extract from Cannabis?

Dr. Fisher will be participating in a panel discussion in September 2019, being held in Las Vegas, Nevada. Cannabis became legalized for recreational use in Nevada on January 1, 2017, after having been legalized for medical use since 2000. The discussion is titled, “What Can Nevada Extract from Cannabis?” The panel brings together a collection of political, business, health, and other experts to discuss what Nevada might expect in terms of entrepreneurship, tax revenues, pain relief, and recreational use. In addition to Dr. Fisher, the panel includes the following experts:

Dr. Mowgli Holmes, co-founder and CEO of Phylos Bioscience. He was a founding board member of the Open Cannabis Project, and is Chair of the Oregon State Cannabis Research Task Force.

Chris Giunchigliani,former state Assemblywoman and past president of the Clark County and Nevada state education associations. Sheis a member of the Nevada Marijuana Advisory Panel.

Brandon Weigand, Chief Compliance Officer for The Source Dispensaries. He is responsible for improving the efficiency of operations, and for regulatory compliance.

Wikipedia describes an e-cigarette as follows:

An electronic cigarette or e-cigarette is a handheld battery-powered vaporizer that simulates smoking … but without burning tobacco. Using an e-cigarette is known as "vaping" and the user is referred to as a "vaper." Instead of cigarette smoke, the user inhales an aerosol, commonly called vapor.

E-cigarettes, also called vaporizersor vape pens, are used to vape either tobacco or cannabis. Some vaporizers are disposable, while others have reusable pens that take replaceable cartridges containing e-liquid (see Figure 1). 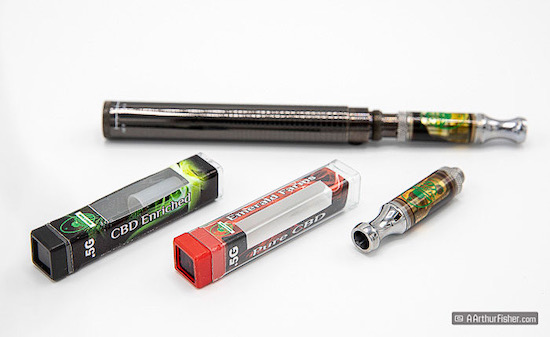