Why Most Doctors Are Reluctant to Recommend Medical Cannabis 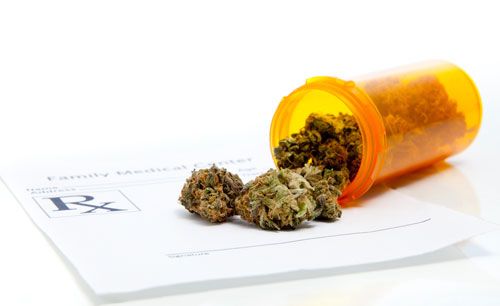 My brother has multiple sclerosis (MS). MS is a degenerative disease affecting the brain and spinal cord; it generally causes problems with vision, balance, and muscle control. My brother’s body was deteriorating, but none of the medications his doctors recommended seemed to help. While researching the disease on his own, however, he discovered that stem cell transplants have been successfully used to halt the progression of the disease. He was unable to undergo the procedure in the US; he eventually had it performed in Mexico. It’s been 1,193 days since my brother’s stem cell transplant, and so far, the disease has not progressed (my brother has documented his journey here).

My brother, along with many of the people (from all over the world) who underwent the transplant procedure with him in Mexico, was extremely frustrated that none of his doctors had even mentioned — let alone recommended — having a stem cell transplant. Just recently, one of his doctors, Dr. Timothy West, formerly of UCSF Multiple Sclerosis Center and Sansum Clinic, Santa Barbara, gave a talk that provided some much-needed clarity on the issue.

Dr. West explained that when doctors get their licenses to practice medicine, they take a vow to “first, do no harm.” Doctors take this vow very seriously. In particular, doctors strongly resist recommending any treatment that may cause patients harm. Even if there’s evidence a treatment might work, if there is a risk that the treatment may cause harm to the patient, then doctors will generally refuse to take that risk, regardless of whether or not the patient himself is willing to take the risk. In the case of stem cell transplants, there is a chance that patients may die from the procedure. Consequently, doctors are not willing to recommend stem cell transplants, especially when alternative treatments are available to address the condition. My brother's blogpost describing Dr. West's comments is eye-opening:

First, he [Dr. West] said that a patient's own assessment of his illnesses is much worse than how a doctor perceives it. That sounds plausible to me, almost to a frustrating level.

Second, he said that doctors practicing western medicine have an obligation to the Hippocratic Oath, which basically states, "first do no harm." According to societal norms, it's better for a doctor to do nothing and watch his patient slowly die than to intervene with a powerful drug and accidentally kill the patient. This is true even if the drug has a good chance of curing the patient and potentially saving his life. Doctors don't have the option of risking life if there's a less dangerous way. Think about the liability here.

Add those two thoughts together. The patient thinks he's in dire straights, willing to risk his horrible life to save a more normal one. But the doctor must "do no harm," so he must avoid administering a highly-effective treatment with a high mortality rate. Half of neurologists consider a mortality rate of 1:5,000 to be too high of a risk, yet only 17% of patients consider that too high. HSCT [Analogous Hematopoietic Stem Cell Transplant] has a mortality rate in the ballpark of 1:500, maybe more, so it is considered very high. Other therapies have mortality rates of hundreds times less. Forget the fact that they only slow down MS; they don't actually stop it.

Now consider the case of medical cannabis. Currently, most doctors refuse to recommend cannabis for use by patients to treat medical conditions. This refusal has been frustrating for many patients who are willing to take the risks. In light of the “first, do no harm” vow, however, physicians’ refusals become a little more understandable. More broadly, though, in addition to the “first, do no harm” hurdle, there are other substantial barriers preventing physicians from recommending medical cannabis for patients.

First, most doctors have had no training at all about the Endocannabinoid System in our body, how it works, or how cannabis may be used to restore function in patients with medical problems.[3] Without understanding the impact cannabis has on our bodies, doctors cannot be sure that recommending cannabis use will do no harm to patients.

Second, a few cannabis medications have been FDA-approved to treat a limited number of conditions, and some physicians have recommended those medications for patients. However, the FDA has not approved the cannabis found in dispensaries (or on the street) for use by patients. Lack of FDA-approval creates lofty barriers, indeed, to physician use. Specifically, while, technically, physicians can legally prescribe medications that haven’t been approved by the FDA, most do not.[1] Medical malpractice insurance generally does not cover medications that are not FDA-approved. So, if a doctor recommends cannabis for a patient, and the patient ends up suing the doctor, the doctor's insurance won’t cover any damages.[4] Furthermore, the FDA approval process yields clinical studies and other information to guide doctors in the use of medications by patients: which medical conditions may benefit from the use of a medication, guidance on dosing, etc. Because cannabis lacks FDA approval, there is little reliable guidance available to help doctors in prescribing cannabis for patients.[5]

A third significant barrier for physicians to recommending cannabis use by patients is its Schedule I status. Regardless of the existence of any state laws approving cannabis use by patients, cannabis is still illegal at the Federal level. As a result, cannabis-prescribing physicians still risk being fined or arrested, losing their license to prescribe medication, or even losing their license to practice medicine.[2], [3] Moreover, hospitals generally require their physicians to follow Federal law, which prohibits use of cannabis to treat patients.[2]

[1] (2011, September 13). Readers’ Corner: Can Physicians Write Prescriptions for Drugs that the FDA Has Not Approved? Alliance For Natural Health USA. https://anh-usa.org/readers-corner-can-physicians-prescribe-drugs-not-fda-approved/